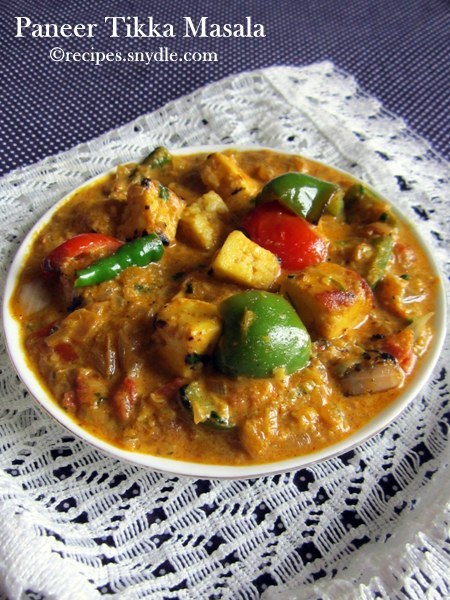 Hi there. Here I am again with a delicious surprise for all the vegetarians out there. Paneer or Indian cottage cheese is something that vegetarians think is magic. Paneer is the great source of protein for those who follow a strict vegetarian diet. But vegetarian does not have to mean boring. Like basmati rice, paneer is one ingredient that is meant for absorbing flavors from the spices that are added to it. The flavours team up excellently with the inherent creaminess of paneer.

Paneer Tikka Masala is yet another classic dish which has its origin in Punjab. It consists of grilled paneer and veggies cooked in rich and spicy sauce. Previously I shared the recipe of Paneer Butter Masala. I intend to share the recipe of Kadhai Paneer soon. You might have noticed that there are many ingredients that are common for the 3 recipes I just mentioned. However, each recipe turns out to be unique and equally stunning. The difference stems from the fact that each of the recipe has different dominant spices. Paneer Tikka Masala is all about the tang from chat masala, earthiness from garam masala and hotness from red chilies. 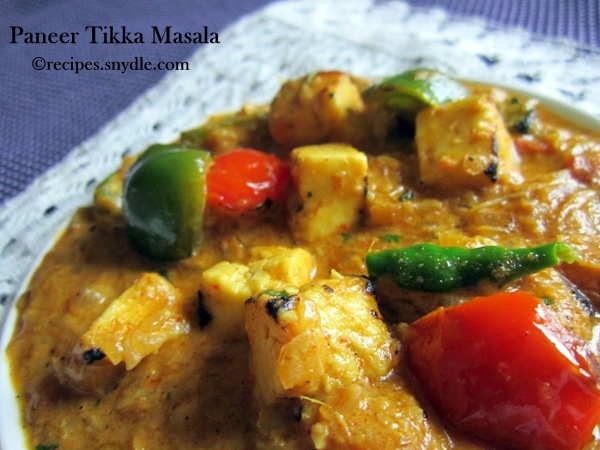 Some of us have often given the idea of making Paneer Tikka at home a pass, mainly because we do not have an oven. Well, I don’t have an oven at the moment. But I made perfect paneer tikkas laced with the characteristic smokey flavor. I used the tawa / griddle to roast the tikkas and then hovered them for a minute over the direct flame of the stove to get the char and smokiness. The tikkas then go into the gravy. Voila! You can now taste heaven on your plate!

Let us see how to make Paneer Tikka Masala. I would suggest you cut the paneer into big chunks. I coudn’t find the block of paneer. So I bought a pack of diced paneer. The dices were bite-size but still doable.