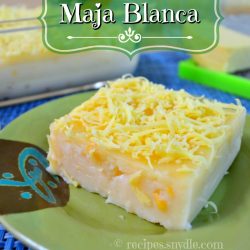 Maja Blanca is a very easy Filipino dessert dish. It is also known as “Coconut Pudding” and is made with coconut milk, corn starch and sugar. The first maja blanca did not include corn and milk, but these were added later to improve flavour and texture. My mother used to make Maja Blanca during special occasions. I remember sneaking in the kitchen when no one was around and grab a